Review: Of Mice and Men 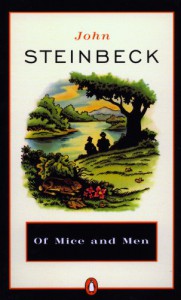 Ok, I think I’m traumatized now! Believe it or not, I read this book for the first time without knowing much about the story or anything about how it ended.  There was enough foreshadowing that I felt pretty sure something horrible would happen by the end, but it ended up being a bit beyond what I had expected.

I really enjoyed reading it, though. This is probably one of the more accessible classics I’ve read, and not just because it’s so short.  The story quickly captured and held my interest, and I could sympathize with the characters.  Steinbeck did a great job of making the characters’ motivations clear without spelling everything out in excruciating detail.  I felt like I understood exactly how and why everything happened the way it did.

This could easily be read in a single sitting, although I read it in three. I started it late last night, and then I read a little more while I was eating breakfast in the hotel lobby.  (Yes, I’m on yet another business trip.)  Thank goodness I didn’t finish this while I was eating breakfast.  I’ve never tried it before, but I suspect bursting into tears over one’s oatmeal would draw strange looks.  I finished it later in the evening, safely tucked away in my hotel room.  This book is not safe for reading in public places.

This was my first Steinbeck read. It may take me a while to cycle back to him, but I’d definitely like to try some of his other work in the future.

The Shadow of the Torturer by Gene Wolf.