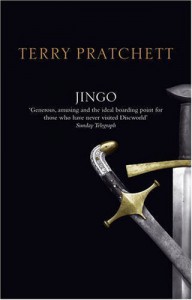 Jingo is the fourth book in the City Watch subseries of Discworld.  When I first started this subseries, I didn’t think I was going to like it very much.  It’s grown on me, though, and I think it’s now my second favorite after the Witches subseries.

In this book, a disagreement between fishermen in the middle of the sea between Ankh-Morpork and Klatch triggers buried resentments and prejudices among citizens of both places until it appears that war is inevitable.  As is common with this subseries, there was a little bit of a mystery involved, and that helped keep the story more interesting.

Pratchett often uses humor to impart some sort of a message, and I thought this book was one of the better examples of that.  He used humor to point out the ridiculousness of how people tend to divide themselves into “us” and “them” and vilify the “them”, assuming the worst about their intentions and beliefs.  There were a lot of very funny moments, and yet those ridiculously funny things weren’t so terribly far from the behavior of real people in our world.