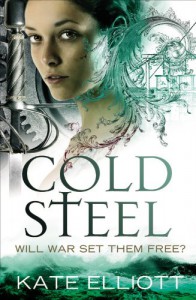 This is the final book in Kate Elliott’s Spiritwalker trilogy.  It was more entertaining than the middle book, which I thought had a lot more boring and tedious parts.  There was one aspect of the story that I feared would be stretched out for the entire book, but it was wrapped up earlier than I expected so I was happy about that.  The story held my interest better than the second book and equally as well as the first book.  There was a minor thread or two that never really got tied up, but the ending wrapped most things up pretty well and I was satisfied with it.

As far as the series itself goes, it was pretty good, but it had several annoyances as I’ve mentioned in my reviews for the previous books.  The story was entertaining, for the most part, and I liked the characters.  I also enjoyed the character-driven humor which seemed to increase as the series progressed.  I did think things often happened too conveniently, and with a few niggling inconsistencies here and there.  I think, if I hadn’t had such fond memories of this author’s Crossroads trilogy, I might have enjoyed this series a little more for what it is because my expectations wouldn’t have been as high.  I did enjoy it, but I was a little disappointed by it too.

As a side note, for those of you who have been waiting for me to get to Hogfather… that one’s next up on my list. :)  I have to leave in a few minutes to spend Thanksgiving with family and I’m not sure how late I’ll get back.  I doubt I'll be able to get very far into it until tomorrow.