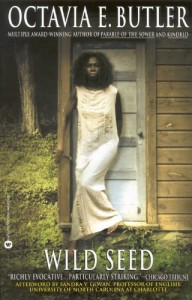 I spent the majority of this book trying to decide whether or not I liked it, and debating whether or not I would want to read the rest of the series.  The omnibus containing this series had been on sale for $1.99 earlier this month, and I bought it, so I already had the next book available.

Early this year I’d read the author’s Xenogenesis trilogy, also sometimes referred to as Lilith’s Brood, and I really enjoyed it.  This book shared a lot of similar themes, although the story and setting are quite different.  Slavery is a particularly big theme in this book.  With this book, unlike with the Xenogenesis series, I didn’t feel like there was much of a story beyond the themes being explored.  It’s very possible I would have appreciated Wild Seed more if I’d read it first.

The story in Wild Seed is set in our world, ranging from the years 1690 through 1840.  There are two main characters: a woman named Anyanwu and a man named Doro.  Anyanwu is a caring, warm woman for whom her family and community mean everything.  She’s able to see inside her body and makes changes to it.  For this reason, she’s been able to heal herself and remain alive for hundreds of years.  Doro has been alive even longer, but he has different “talents”.  He wears a body until it dies or until he gets tired of it.  He then takes over another body, killing the original owner in the process.  Doro’s entire existence is devoted to seeking out people with special abilities and breeding them with each other.  He’s completely amoral, concerned only with meeting his own objectives.  To whatever extent he treats people kindly, it’s only because doing so will help him meet his goals more effectively.  Shortly after this book begins, Doro discovers Anyanwu.  Her abilities far surpass that of the other people he’s collected, so naturally he wants to start breeding her ASAP.

Most of the story consisted of different people being mated with each other as dictated by Doro.  I wouldn’t call this a romance novel exactly, especially since some of the relationships in the story were quite disturbing and not at all romantic, but it sometimes felt like one because the story focused mainly on relationships.  I definitely wouldn’t say this book didn’t have substance, though.  It absolutely had substance, and it brought up important issues in a non-preachy way.  These issues aren’t new to a modern audience, though, and I wanted a more interesting story to go along with the exploration of those issues.

The book did have interesting aspects to it, and I wasn’t really bored by it.  Since I already have the rest of the series, it’s tempting to keep reading and see where the story goes next.  To try to make up my mind, I read a little bit about the other books and ultimately decided to stop here.  There are too many other books I’m more interested in reading.